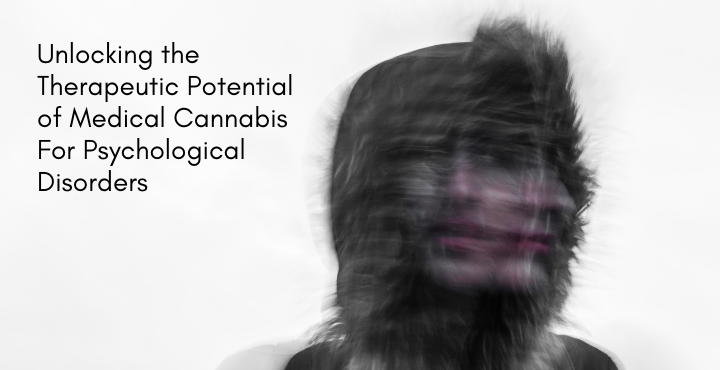 Unlocking the Therapeutic Potential of Medical Cannabis For Psychological Disorders

USA- A country where the number of people with mental health issues is more than the number of patients dealing with diabetes or any other form of endocrine disorders is definitely a cause of concern. Not that, the other disorders are low key or not important to consider.

But, mental health is something which might result in inefficiency in every possible way- Be it emotionally or physically, personal or at work.

So, basically, life is shattered in so many ways.

I can understand when everywhere the are claims of cannabis causing psychosis are going around, reading cannabis as a mental health aid might have struck your mind a big way.

Don’t worry! We will take on this subject one by one and get all your queries answered.

First, let’s understand the concept of medical cannabis and its mechanism of action for managing a range of mental health disorders.

Cannabis is a herb which has a diverse range of cannabinoids and terpenes present. However, most of the researched cannabinoids are — THC and CBD. The reason these cannabinoids work perfectly with our body is that they are similar to the endocannabinoids produced by the human body.

So, they can easily interact with the receptors of the endocannabinoid system which are responsible to regulate mood, anxiety, appetite, sleep, and other bodily functions.

Mental health disorders- these are not a single condition, but a group of disorders which have different triggers. However, most of them result in similar symptoms such as anxiety, binge eating or not eating at all, depression, and many others.

But, is medical cannabis useful for these symptoms in any way, or is it just a hype?

Medical cannabis is a mood elevator. So, whenever you feel depressed, consuming strains will help to modulate the depressive emotioned into energized elevated moods. However, one must avoid themselves from eating any pure or high indica strains, or you will remain couch locked for most parts of the time.

I am sure you would not be wanting that in any way.

Researchers at the University of Buffalo confirmed the role of medical cannabis in motor control, cognition, emotions, and behavior. Because these are managed by the endocannabinoids as well.

Anxiety is something which every person goes through during their lifetime. But, it is something which takes away life from the patients suffering from it. While many options are available already in the market, still, medical cannabis is rising in popularity as a medicinal alternative for managing those emergency panic attacks.

Also, various anecdotal researches have confirmed that medical marijuana is an incredible treatment alternative for people with any type of anxiety issues.

How Will Medical Cannabis Be Effective?

Although THC strains can also be useful. But only when used at lower doses. So, CBD strains can be helpful in managing a number of anxiety issues.

Medical cannabis helps in relieving the symptoms by-

Serotonin, also known as, “feel good” hormone is responsible for mood elevation. CBD interacts with receptors of the endocannabinoid system and uses its anti-anxiety effects.

This region of the brain has an important role in the activation of hypothalamus activity. Cannabis-using its anxiolytic activities helps in the management of stress levels significantly.

So, consume medical cannabis and get back to your life starting today.

Insomnia is a symptom associated with every mental health disorder such as depression, PTSD, anxiety, and others. And guess what? Cannabis is also helpful in managing or restoring sleep cycles, along with no issues of side effects.

This is one thing which can turn life into a never-ending nightmare. However, it can also be resolved by medical cannabis easily. Here are some of the benefits of using medical cannabis as an aid for relieving PTSD disorders effectively.

As we already mentioned above, cannabis is an excellent stress reliever. So, the same mechanism of action helps in relieving any emotional outbursts. Hence, ultimately elevating mood.

Medical cannabis helps in decreasing REM stage of the sleeping cycle. This stage is responsible for forming dreams.

Medical cannabis is an all-rounder for every medical condition known to people. However, whether or not it can be effective for your medical condition cannot be still confirmed at all. So, ask a specialist and transform your life into a life worth living for easily.