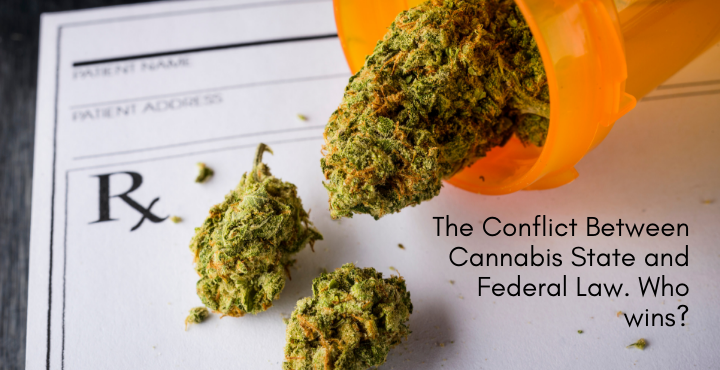 The Conflict Between Cannabis State and Federal Law. Who wins?

Even though cannabis is now legal in many states of the United States, it still remains illegal at the federal level. This often causes a lot of confusion among cannabis users.

Are there any legal consequences of using medical cannabis since it’s still federally illegal?

Can federal government put you behind the bars for possessing or growing cannabis?

Well, this is only the beginning of the list of the questions people have. Where cannabis is legal one level, it is outlawed on another.

So what does it mean when federal law says one thing and state law says the other? Who wins in this conflict?

And how cannabis users are affected?

The cannabis state and federal law

It is a question that has bothered many cannabis users for a very long time. It stretches back to the date when California first legalized the use of cannabis in 1996. However, things are different now. And with more than 33 states legalizing the use of cannabis, the fog on the conflict of the laws is slowly disappearing now.

Many sessions claim, “cannabis is illegal in the nation even in states like California and Colorado.” And this is true. Federal law is the supreme law of the land. This means federal law overrides state laws. Despite the fact that many states now regulate, license and impose tax on state-cannabis, cannabis use is outlawed on federal level.

So does this means no matter whether you live in a state where cannabis is legal or not, consuming it is illegal?

But the answer is not that simple.

According to a constitutional law professor at Loyola Law School in Los Angeles, Karl Manheim, state has a certain level of autonomy which means congress cannot take over state processes.

What is the conflict?

Well, the conflict is whether or not the state law impedes federal law enforcement. For instance, a state passes a law just like Vermont recently passed a legalization law for cannabis use. According to Vermont’s legalization law, any adult can grow, possess and consume cannabis.

Moreover, the law allows you to consume and possess cannabis, but you cannot buy or sell it. The state also eliminated all penalties for some cannabis activity. This type of legalization law is highly unlikely to breach the federal law because Vermont isn’t preventing federal prosecutors to enforce federal law.

Today, many states have licensed and imposed tax on legal cannabis businesses. This can actually cause a serious conflict. Can states impose  tax on federally illegal activity? Another conflict could arise if the state hinders the work of federal prosecutors by introducing a law to prevent them from investigating cannabis dispensaries.

The fact is federal officials are free to go to any state and press charges against any legal cannabis activities in the state. Even in states where cannabis is legal. The official could go to any state and arrest any individual growing cannabis. They have the authority to do so.

The Department of Justice(DOJ) has issued eight guidelines for federal officials. These are the guidelines that the officials have to use to regular present federal enforcement priorities. These guidelines are:

To avoid getting grilled by this state-federal law conflict, obtain a valid San Diego medical marijuana card online. An MMJ card protects you under the state law and prevents the federal government to take any legal action on you.