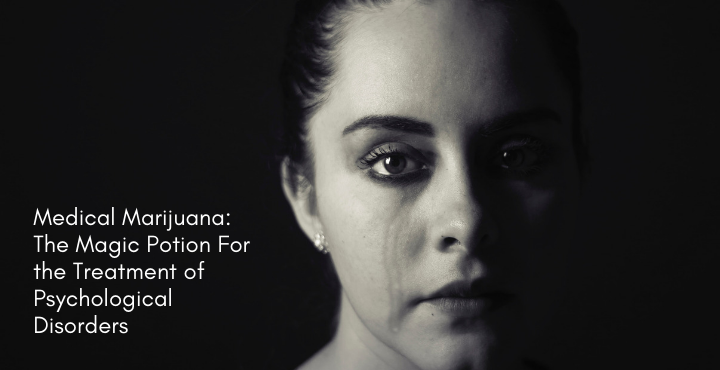 Medical Marijuana: The Magic Potion For the Treatment of Psychological Disorders

So, how are you doing?
Life taking turns?
Right!

Can’t control life. You never know when a crest turns to trough or the other way round. Who could have thought Jonas Brothers would be back. Did you like their comeback? Sucker for you….

As it turns out I am a sucker for medical marijuana. As are many people. Not in an addictive way, but actually therapeutically. Everyone goes through their share of trauma and suffering, some more than others. The number of people getting affected by psychological disorders is ever increasing.

This issue needs to be addressed. Psychological disorders are a big cause of concern because it affects you in all aspects- emotional, physically, at work, at home, everywhere. If you want to be physically fit, mental fitness is necessary. There was a time when these disorders weren’t given importance and emphasis, but with time people realized the gruesome effects of them and the situation changed for the better.

There are various treatments one can opt for but the hard fact is that the medications prove to be addictive and have various side effects. Dilemma?

The treatment of your Psychological disorder.

Medical marijuana in all its might has shown its wide range of benefits in combating a number of conditions. Where people have this notion that it affects your mind and hampers your cognition, medical marijuana proves them wrong. It actually is very effective in the treatment of various psychological disorders.

As we have already established, medical marijuana is effective in the treatment of psychological disorders. Let’s understand what is the role of the endocannabinoid system.

Cannabis actually has a a number of cannabinoids and terpenes. THC and CBD are the most common among them. The reason they are so common and researched is that they are really similar to the endocannabinoids produced by the human body.

Therefore, they interact with the endocannabinoid system in the body with high efficiency and help in regulating mood, stress, sleep, anxiety and various other psychological aspects. Interesting, right?

Medical Benefits of the Herb

So, now let’s look at how medical marijuana benefits the people suffering from psychological disorders.

It is actually a mental health disorder where a person constantly feels low moods and impairs your daily life. It affects your work, study, sleep, health, relationship with others and various other daily tasks.

Want to elevate your mood? Hey, medical marijuana! We need you.

Get a San Diego medical cannabis card and access quality medical marijuana strains to treat your depression. You can improve your mood with strains like Jack Herer, Pineapple Express, and Harlequin. The strains with high amounts of limonene are generally good choices to elevate your mood. Also, you can go for strains that help in improving your interest in activities and reducing fatigue like XJ-13, Cinex, and Cannatonic.

Anxiety affects millions of people in the country. It is important to study it as it affects a person’s daily life. It is often caused by a combination of psychological, social, and biological sources of distress.

Yes, it is treatable.

There are a number of strains one could try. It is important to choose the strain that fits you. So, you need to start with the hit and trial method to learn which strain suits you. I have some suggestions you could partake like Master Kush, Pennywise, Skywalker OG, ACDC, White Widow, and Stephen Hawking Kush.

These strains help the person in increasing positivity, focus, energy, and in all calms the person. Medical marijuana actually combats the symptoms of the disorder to eventually reduce anxiety. With a wide variety of strains available for treatment, one could choose from a number of scents and tastes to get the best effects of the herb.

It is a disorder which is associated with extreme changes in the mood. At one instant, the person feels a burst of energy and positivity while in the second instance, he feels very low. It basically comprises of high maniac episodes and low depressive episodes. These mood swings can be unpredictable as well as extreme.

Its symptoms include- hallucinations and delusions. The patient starts seeing things which are not real and starts living in a false reality. This disorder can affect a person’s life very much. It is not easy to function when a person feels that sudden mood change.

Medical marijuana could be just the right thing for you. There are various other treatments available to treat the disorder but medical marijuana proves to be an excellent choice if a person doesn’t want to experience side effects and get addicted.

Some strains that could help you with the disorder are Girl Scout Cookies, Strawberry Cough, Sour Diesel, Northern Lights, and Blue Dream. Go for the strain that suits you the best. But, for you to access medical marijuana legally, you need to possess a San Diego medical cannabis card.

It is actually not a disease in itself but a combination of symptoms which are associated with a decline in thinking ability and memory. Alzheimer is the disease that is one of the most common. A person suffering from dementia generally experiences impairment of memory, ability to focus and attention, visual perception, communication and language, and reasoning and judgment.

Medical marijuana proves to be effective in combating the disorder and reducing its symptoms. Though there have been no clinical trials, various studies show that it could be used as a treatment to people suffering from the disorder.

One key feature of Alzheimer disease is the formation of clumps of a protein in the brain. Some studies have shown that THC and some other components of cannabis help in removing this protein. Another study involving mice with symptoms of Alzheimer’s showed improvement in learning with the use of THC and CBD oil.

4.4 percent of the adult in the United States have ADHD, but less than 20% of them seek professional help for it.

ADHD or Attention Deficit/Hyperactivity Disorder is a condition that is very common among the children in our country. Yes, it can affect a person of any age group but its symptoms are developed in childhood. People suffering from ADHD find difficulty in concentrating and focusing on a single task which affects their daily life.

There are a number of treatments for ADHD but still, some people fail to find relief. With medical marijuana entering the picture of treatment, people have started to opt it over other forms of treatment. Firstly, it is not addictive and secondly, it has almost none side effects.

Medical marijuana boosts dopamine levels in the patients by blocking the action of Gamma-Aminobutyric acid or GABA. Also, inflammation of the nerve system is a common cause of ADHD and medical marijuana is an effective anti-inflammatory drug which makes it an excellent tool to treat ADHD.

It is yet another condition that affects millions of American. The condition can be very difficult to deal with for the patient as well as his family. It is characterized by the impairment of the functions of the brain to the extent that the patient loses his sense of reality.

Though there has not been any concrete proof of medical marijuana being effective in its treatment, it is studied to show therapeutic properties that help patient combat schizophrenia. Yes, medical marijuana does not offer to be the cure of the condition but it certainly helps in reducing its various symptoms.

THC and CBD are two cannabinoids that stand out in the herb. Where THC is known for providing psychotropic and euphoric sensations, CBD is popular for its non-psychotropic effects. Some popular studies have shown that strains with high CBD help in the treatment of schizophrenia.

OCD or obsessive-compulsive disorder is a type of anxiety disorder where a person has obsessive, unwanted, recurring thoughts and ideas that drive the person to do something compulsively and repeatedly.

People suffering from OCD experience obsessions like repeated, intrusive, persistent, and unwanted urges that cause distress or anxiety.

These obsessions could be:

Yes, there are medications and therapies that help treat the disorder but medications cause serious side effects and addiction while therapies take years to achieve any substantial results. Medical marijuana, on the other hand, proves to be very effective in the treatment of the condition. THC found in cannabis reacts with anandamide, a substance present in the brain to provide soothing or calming effect throughout the body.

Cannatonic, Harlequin, Cherry Kola, Charlotte’s Web, and Cherry Pie are some of the strains that can prove to be very effective for your OCD. Choose the one that suits your needs and interests.

It is a condition that causes difficulty in social interaction, communication, and repetitive behavior. The exact cause of autism is still not known but it is believed that both genetic and environmental factors cause the condition.

There have been many studies that have shown medical marijuana to be useful in the treatment of the condition. One such study was done in Israel which found that medical marijuana was effective in reducing behavioral issues and epileptic seizures in children with autism.

One can consume medical marijuana in a number of ways like vaping, eating, using oil, or even smoking. Choose the strain that suits your needs and interests and consume it any which way you want. Some common strains that help in the treatment of autism are Hindu Kush, Northern Lights, Black Bubba, Blue Dream, and Green Crack.

PTSD or Post Traumatic Stress Disorder as the name suggests is a stress disorder that occurs after a traumatic event. The person feels difficult to cope up with the situation and becomes a victim to the condition.

Some common types of PTSD are:

Medical marijuana could be an effective form of treatment for the condition. It helps the person in getting over the situation. Also, it helps in elevating mood and providing the much-needed boost in energy. Some strains that could help a person suffering from the condition are OG Kush, Pineapple Express, Cannatonic, Master Kush, and Blue Dream.

Medical marijuana has taken huge leaps in the past 5 years to take over the medical sector. People have now started to embrace the herb because of its wide range of benefits. With it now legalized in 33 states in the country, the future sure looks bright. What view do you have on that?

Yes, nobody else knows what you have been through, I know it is hard to just get over your troubles. If you knew how to do that, you would have already done it. But you are here reading about this, this shows that you are fighting for it. Getting treatment tells you are strong to embrace what is necessary. Choose medical marijuana or consult a doctor and leap towards the lights in the sky. The darks turn grey and then into beautiful colors. Fight for it. You know you can.

Also Read More: How To Obtain A Medical Marijuana Card In San Diego?