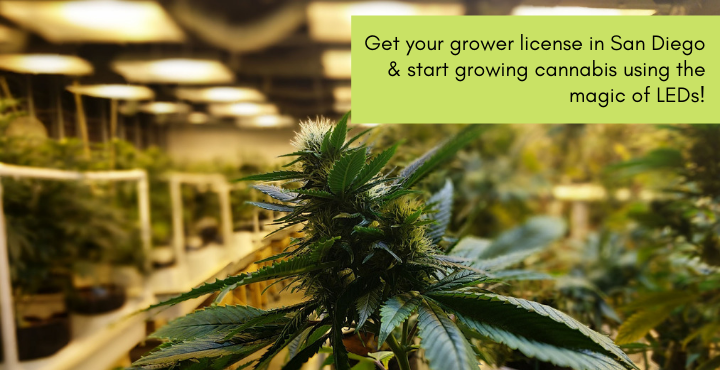 Get your grower license in San Diego & start growing cannabis using the magic of LEDs!

Planning to get those swanky buds blooming at your home? Cool! We have a plan in hand to get you to cultivate high quality cannabis.

So, how exactly are you going to do that?

Don’t be surprised. It works like magic. You just need a grower license in San Diego.

The backdrop of LEDs

Although Light Emitting Diodes (LEDs) have been around since the 1960s, it’s only recently that marked an increased usage. Reason? LEDs were expensive and did not produce the wide gamut of colors as they produce now. This established HID (high intensity discharge) as the top choice for growing cannabis.

There are various modes of lighting that growers use. This includes outdoor lighting, CFLs, HIDs, and finally LEDs. The main component which impacts the growth is the wide spectrum of lights. The better the lighting, higher the yield is. Also, if you’re growing multiple plants, ensuring ample light for each plant becomes a challenge.

This is where LED steps in!

What are the advantages of using LEDs?

If you’re planning to use LEDs, you’re on the right track.  Just get a grower license in San Diego to get started.

They are energy efficient

One of the major challenges of growing cannabis indoors is energy consumption. With LEDs, you can eliminate that. It uses almost half the amount of energy as HIDs and has a larger shelf life. LED lights last up to 60,000 hours compared to just 3000 hours with an HID.

You can have a better grip over the temperature control because LEDs generate much lesser heat. This eliminates the need for cooling tubes and other add ons to maintain the optimum temperature for growth.

This is specifically handy during summers when growing cannabis indoors can be a challenge due to soaring temperatures.

A typical LED lighting system consists of hundreds of bulbs which produce an individual spectrum of light. You can combine light chips with varying bandwidth to test which combination of spectrum works the best for you.

You can fine-tune the spectrum specifically for vegetative and flowering phase.

The key to better growth is that the whole plant receives an even light. Improper lighting can result in hot spots and dead zones on the cannabis plant. LEDs can direct the light evenly over the plant which includes the canopy and the leaves.

Constant light coverage ensures the growth is fast and productive.

With pacing technology, it is expected that more innovative and energy efficient LEDs will be developed in the future. The introduction of LEDs to the cannabis growth industry has injected a positive impact which promises higher yield and better quality buds. If you’re attracted to the idea of using LED grow lights, it’s advisable to get your grower license in San Diego which can give you the authority to grow.

Cannabis is a healthy investment for well being. With productive options to grow at home, yielding better quality buds has become easier and cheaper!

Also Read More: For High-Quality Buds, Grow Your Own Cannabis at Home